This year I have decided to take part in the Goodreads reading challenge. I am hoping by the end of the year to have completed a total of 50 books, which will hopefully be doable.

I started a list (below) to get me motivated and excited which will be updated as the year goes on. 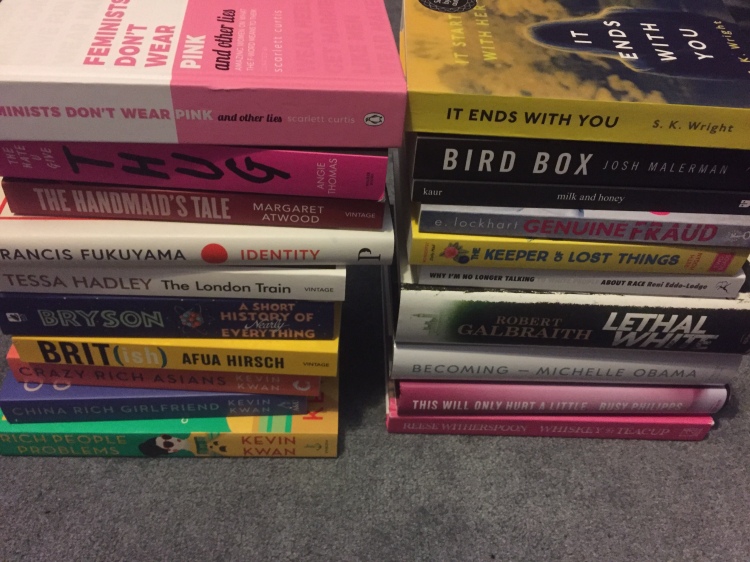 3. The Handmaid’s Tale by Margaret Attwood

4. A Short History of Everything by Bill Bryson

5. The London Train by Tessa Hadley

7. The Hate U Give by Angie Thomas

12. Milk and Honey by Rupi Kaur

13. The Keeper of Lost Things by Ruth Hogan

14. Why I’m No Longer Talking to White People About Race by Reni Eddo-Lodge

15. This Will Only Hurt a Little by Busy Phillips

16. Brit(ish): On Race, Identity and Belonging by Afua Hirsch

17. Feminists Don’t Wear Pink and Other Lies by Scarlett Curtis

21. One day in December by Josie Silver

23. The Fall Guy by James Lasdun

24. I Owe You One by Sophie Kinsella

25. Where the Crawdads Sing by Delia Owens

26. The Seven Deaths of Evelyn Hardcastle by Stuart Turton

Do you have any recommendations? Let me know by commenting below or send me a tweet @bookwormgirl_24.