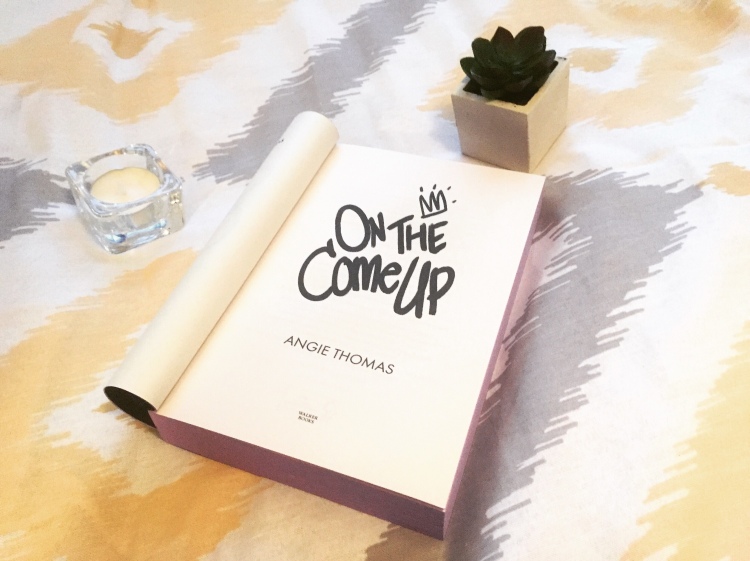 Sixteen-year-old Bri wants to be one of the greatest rappers of all time. It’s hard to get your come up, though, when you’re labelled “trouble” at school and your fridge at home is empty after your mom loses her job. But Bri’s success is all that stands between her family and homelessness, so she doesn’t want to make it – she has to. Even if it means becoming exactly what the public expects her to be.

On the Come Up, the second novel by best-selling author Angie Thomas, does not disappoint as she tackles issues surrounding poverty, race and discrimination.

The book is narrated by Bri, 16, who lives in the same fictional town as the characters in The Hate U Give (THUG) – Garden Heights. She lives with her mother and older brother, Trey, who try their best on a daily basis to put food on the table. It was interesting to see how the different family members dealt with having to seek help at food banks, while also dealing with the stigma society creates around it.

As Bri is very driven and wants the best for her family, she wants to make money by doing what she knows best – rapping. This was a really engaging part of the plot, as the reader gets to view a world of music that is very complex and fast-paced.

The author gave an insight into how the rap industry can have a negative impact on an artist’s image in this novel. One of the main story-lines focuses on how Bri’s lyrics get misintereted and how she deals with the consequences.

Bri has a lot going on in her life as she lost her dad, who was a successful rapper, at a young age and her grandparents and mother don’t get along so she feels like she is in a constant tug of war. She is a very likeable character – both fun and determined. One of the most positive traits she has is being confident enough to stick up for herself.

The main character goes to a school called Midtown, which isn’t the worst in the area, but is far from the best. It is a school that is given government grants to help children from poorer backgrounds get a better education. At school, like most of the other black children, she is treated slightly different to the others.

Her cheeky nature is seen, by the teachers, as misbehaving which leads to her getting annoyed when they label her a troublemaker. In the book she says: “There’s only so much you can take being described as somebody you’re not.” Thomas uses this to show how wrong it is to stereotype all black women as being loud and angry.

She just wants to be known for who she is and nothing else – not for being an angry girl or for being the daughter of a rapping legend. It was disheartening at times to see how much pressure she was put under because of the school’s misconduct and her family troubles when as a teenager she would have a lot on her plate as it is.

One thing fans of Angie Thomas will pick up on and enjoy is the way she has intertwined the plot of On the Come Up with THUG. The young boy who got killed in her debut novel is mentioned in this one as a reminder of the fear black children in the neighbourhood have of authority.

The author conveys what happened in THUG to show how serious the violence and guns associated with gang members actually is for the characters and how it impacts them negatively. As readers we see the daily struggle of living in an area where people live in fear, even inside their own homes.

Drug dealing is another big part of this novel and it is unsettling to read about how corrupt the government system can be. Thomas writes: “The drug dealers in my neighbourhood aren’t struggling. Everybody else is.” This is what is so great about Thomas’ writing technique. She is able to get the reader feeling aggrieved and confused just like the characters are. It is also made even more upsetting knowing this is a reality for many people.

The other characters in the book were very diverse. It was nice to see her friendship with her two best friends, Sonny and Malik, progress throughout the book, but also how they all had to deal with different issues within their own lives. There are some silly fights and a couple of relationships that blossom in the novel too, which made the story a little less intense.

There were some characters that got sidelined by the protagonist and it would have been nice to see more of them. One that stood out to be most fascinating was Milez, a pop singer who Bri meets in a rap battle. He isn’t seen as a major character and it would have been interesting to see more of him and his character development. He seemed very complicated and misunderstood, which always makes for a really great character.

Trey is also another character that made the book more enjoyable, as it was a breathe of fresh air to have someone so selfless, caring and forgiving in her life and their mother’s. Even though he has a calming impact on others in the novel, it was sad to see how much he had chosen to give up to help out his family.

Although there is a lot going on in this novel, at times it felt like it could have had a faster pace. However, that was only one minor downside to it and the political subject matters of the book are very important and everyone should be made aware of them.

Angie Thomas always seems to successfully gets the balance right between demonstrating the difficulties that face black communities and the lighthearted moments that happen in every day life.

Did you enjoy this book? Let me know your thoughts by commenting below or Tweet @bookwormgirl_24

3 thoughts on “Review: On the Come Up by Angie Thomas”