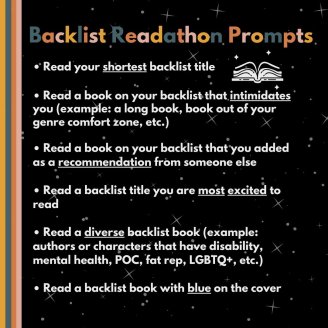 The Backlist Readathon starts on March 9th and ends on the 15th. I decided to join in the fun as I have so many backlist books I want to read that I never got the chance to. It is hosted by Mel @ Mel to the Any, Zoe @ zoeereads, Gabby @ gabbyreads, Emily @ alittlewriterem, Jacqueline @ We Be Book’N and Chandler @ chandler ainsley.

Alice’s Adventures in Wonderland by Lewis Carroll. I’ve always wanted to read this and this is the perfect opportunity. I think it’s around 200 pages long.

“After a tumble down the rabbit hole, Alice finds herself far away from home in the absurd world of Wonderland.”

Read a book on your backlist that intimidates you

The Mars Room by Rachel Kushner. This book was nominated for the Booker Prize last year and I just hope it lives up to expectations. Sometimes hyped books aren’t always as good as underrated ones in my opinion.

“Romy Hall is starting two consecutive life sentences at Stanville Women’s Correctional Facility. Her crime? The killing of her stalker.

Inside awaits a world where women must hustle and fight for the bare essentials. Outside: the San Francisco of her youth. The Mars Room strip club where she was once a dancer. Her seven-year-old son, Jackson.

As Romy forms friendships over liquor brewed in socks and stories shared through sewage pipes her future seems to unfurl in one long, unwavering line – until news from beyond the prison bars forces Romy to try and outrun her destiny.”

Tell No One by Harlan Coben. My husband has been asking me to read this one for quite some time. I guess there’s no excuse not to now.

“Eight years ago David Beck was knocked unconscious and left for dead, and his wife Elizabeth was kidnapped and murdered.

Dr Beck re-lived the horror of what happened that day every day of his life. Then one afternoon, he receives an anonymous email telling him to log on to a certain website. The screen opens on to a web cam – and it is Elizabeth’s image he sees.”

Read a backlist title you are most excited to read

Two Can Keep a Secret by Karen M McManus has been on my TBR since I read One Of Us Is Lying. I love a good thriller.

“A perfect town is hiding secrets. Secrets that somebody would kill to keep hidden.

Ellery’s never been to Echo Ridge, but she’s heard all about it.It’s where her aunt went missing at age sixteen, never to return. Where a Homecoming Queen’s murder five years ago made national news. And now she has to live there with her estranged grandmother, after her mother lands in rehab.

Malcolm grew up in the shadow of the Homecoming Queen’s death. His older brother was the prime suspect and left Echo Ridge in disgrace. But now he’s back- just as mysterious threats appear around town, hinting that a killer will strike again. Then another girl disappears. As Ellery and Malcolm race to unravel what happened, they realise every secret has layers in Echo Ridge.”

For this one I’m going to choose Spin the Dawn by Elizabeth Lim. I’ve been meaning to read it for a while.

“When Maia Tamarin is presented with an opportunity to change her fortunes, she doesn’t think twice about dressing as a boy and traveling to the Summer Palace to attain it. She knows she could lose her life if she is discovered, but the risk is worth it to save her family from ruin and achieve her own dream of becoming tailor to the emperor. There’s just one catch: Maia is one of twelve tailors vying for the job.

Backstabbing and lies run rampant as the tailors compete in a series of challenges to prove their artistry and skill. Maia’s task is further complicated when she draws the attention of the court magician, Edan, whose piercing eyes seem to see straight through her disguise. But nothing could prepare her for the final challenge: Maia must sew three magic gowns for the emperor’s reluctant bride-to-be, from the laughter of the sun, the tears of the moon, and the blood of stars.

With this impossible task before her, she embarks on a journey to the far reaches of the kingdom, seeking the sun, the moon, and the stars, and finding more than she ever could have imagined. . . .”

Read a backlist book with blue on the cover

Just As Long as We’re Together by Judy Blume. This will be an easier read as it’s not as long as some of the others so hopefully it will help break up the amount of books on my tbr.

“Stephanie and Rachel have been best friends for years, in spite of their differences. Alison is new in town, and immediately becomes an integral part of their group. But is it possible to have two best friends? And how can you call anyone a friend if you can’t tell them your most painful secrets?”

Have you read any of these books? Let me know your recommendations by commenting below or Tweet @bookwormgirl_24