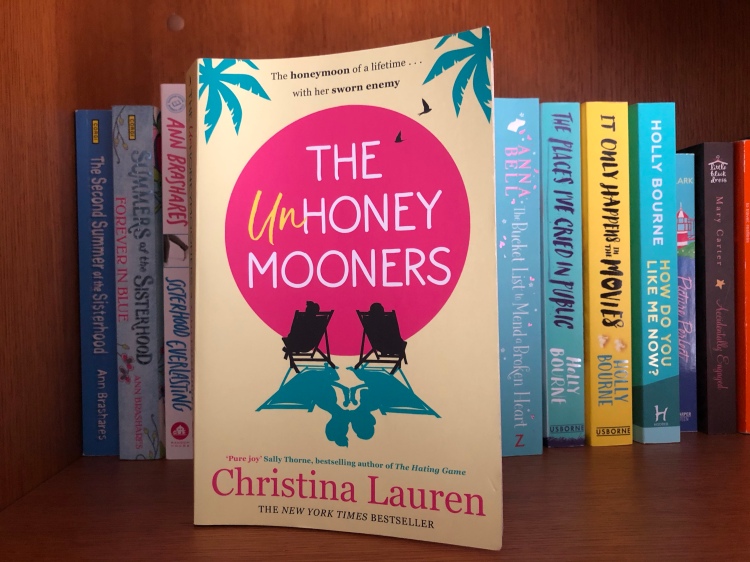 Olive is always unlucky; her identical twin sister Ami, on the other hand, is probably the luckiest person in the world. While she’s about to marry her dream man, Olive is forced to play nice with her nemesis: the best man, Ethan.

Yet Olive’s luck may be on the turn . . . When the entire wedding – except for Olive and Ethan – gets food poisoning, there’s an all-expenses-paid honeymoon in Hawaii up for grabs. Putting their mutual hatred aside, Olive and Ethan head for paradise. But when Olive runs into her future boss, the little white lie she tells him spirals out of control.

Forced to play loving newlyweds, she and Ethan find themselves in closer proximity than they ever expected. Soon, Olive finds that maybe she doesn’t mind pretending. In fact, she’s beginning to feel kind of . . . lucky.

The Unhoneymooners is a brilliant romantic comedy filled with the cutest storyline and hilarious characters.

Olive and Ethan absolutely hate each other, but after their siblings get married and end up with a bad case of food poisoning, neither of them can resist hopping on a flight to a prepaid holiday of a lifetime – there’s just one catch, they have to pretend they’re newlyweds . This is the perfect read for those who love the enemies to lovers and the fake dating tropes.

Sometimes when characters in books go from hating each other to pure love, it can seem unrealistic. But the reasons for Olive and Ethan’s disagreements at the start of the book are all explained in detail as the story unfolds and it doesn’t seem forced or silly when they do get together. Their relationship is really cute and they’re both so likeable and witty.

The first part of the novel is very lighthearted as it centres around their blossoming relationship. However, the second part of the book adds a lot more depth, making it an even better read. It shows the realities of returning back from a holiday and dealing with career lows, family dynamics and trust issues.

The other characters are also an interesting addition, particularly Ethan’s brother who doesn’t always seem to have the best intentions. He isn’t in the book much, but his presence is, and he is a constant topic of discussion between Olive and Ethan.

The scenes with Olive and her twin sister, Ami, are really fun to read. I love their relationship and the bond they have, particularly when difficult times arise. It’s a very realistic relationship, even down to when they do hit a rocky patch, because it’s true to real life and shows normal sibling disputes. Though I did find Ami annoying at times, especially during the wedding scenes as she didn’t seem like a real person, the character came across as a bit forced.

Christina and Lauren’s writing blends into one – you would never know this book had been written by two people, which is great.

This is one of those books that’s so addictive you will end up reading it in one sitting. If you want to be transported to a holiday destination and read a light and fluffy book, then I would highly recommend this one. It’s the perfect summer read.

4 thoughts on “Review: The Unhoneymooners by Christina Lauren”